The City of Jacksonville, Bureau of Alcohol, Tobacco, Firearms and Explosives, State Attorney’s Office for the Fourth Judicial Circuit and the Jacksonville Sheriff’s Office unveiled the new Crime Gun Intelligence Center (CGIC) in a ceremony today in downtown Jacksonville.

“Just days after State Attorney Melissa Nelson came to me with the idea to bring a CGIC to our area, I announced we were going to make this a reality here in Duval County,” Mayor Lenny Curry said. “I am committed to improving public safety, and very hopeful that this center and the coordination it fosters between law enforcement agencies will not only solve more gun crimes but prevent more from happening.”

The CGIC is an interagency collaboration focused on the immediate collection, management and analysis of crime gun evidence, such as shell casings, in an effort to identify shooters and disrupt criminal activity. The formation of this center will bring together cutting-edge technologies and the resources of federal, state and local law enforcement to enhance public safety in Jacksonville.

“The value in this technology for prosecutors and law enforcement is real-time intelligence. With violent crimes involving firearms, any delay in identifying links between the firearm and the shooter, makes it that much more difficult to solve crimes and take dangerous offenders off the street,” said State Attorney Melissa Nelson. “The more intelligence investigators develop and the more we rely on scientific technology, the better our chances to identify the violent offenders, proactively disrupt ongoing and retaliatory shooting cycles, and prevent needless murders and shootings.”

CGIC investigators utilize several tools, including the ATF National Tracing Center, National Integrated Ballistic Information Network (NIBIN) and ShotSpotter, technology that detects gunfire as it happens in high crime Jacksonville neighborhoods.  The goal is to “connect the dots” between these and provide actionable investigative leads in a real-time manner that will result in the arrest of suspects before they can commit additional shootings. These efforts are part of the Comprehensive Gang Reduction Strategy announced by the mayor, state attorney and sheriff in January.

Sheriff Mike Williams said, “The Crime Gun Intelligence Center is a cornerstone to the comprehensive strategy of fighting violent crime that we have rolled out in the past few years. This center will layer both the dedicated staff of expert investigators with the precise technology to literally be in the same room as our partners. All of our shared efforts to streamline the linked intelligence will bring justice even faster than we have been seen in the past.”

“Thanks to the leadership of Mayor Curry, State Attorney Nelson and Sheriff Williams, the national Crime Gun Intelligence Center model has expanded to Jacksonville in what will be a game changer for law enforcement in the region,” according to  ATF Acting Deputy Director Regina Lombardo. “The ATF is proud to support our partners as we work together to investigate and disrupt trigger pullers and their sources of crime guns.”

The Jacksonville City Council approved the funding and placed $1 million into the 2017-18 city budget to build the CGIC. It’s located on the ground floor of the SAO Office/Ed Austin Building. Renovations began in September 2018. 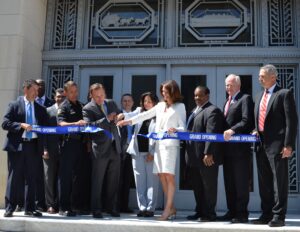 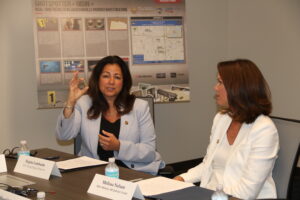 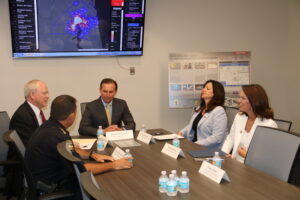