Danielle Ciccerelo was homeless, living in the woods, doing intravenous drugs with no hope or confidence. Her mother tried to get her into a rehabilitation facility to no avail. It was she who contacted law enforcement about her daughter’s outstanding warrant and watched as she was arrested.

Derrick Martin was living in a Southpoint hotel with his children and girlfriend when police knocked on the door and arrested him for drug possession and other crimes. All he cared about was getting high, he said. He was happy to be arrested.

The road ahead for each was not easy, but they stood before a courtroom of peers and cheers Friday as Drug Court graduates. The graduates were part of a group who completed an intensive treatment program that included drug testing, counseling, case management, and regular court appearances. Eligible participants are arrested on non-violent, drug-related charges. Successful completion of the program makes them eligible to have those charges dropped. 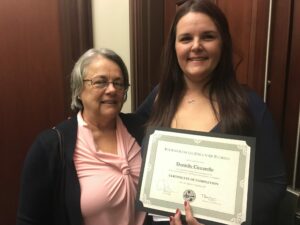 “It was an awesome feeling to graduate,” said Ciccerelo, with her mother by her side. “It was difficult but worth it.”

Ciccerelo told the crowd she now has employment, a car, an apartment, and her life back on track. 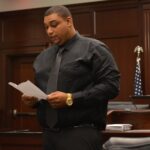 Martin told the courtroom it was hard to put into words his story, but he was happy to share his appreciation of Drug Court and the chance afforded to him.

The State Attorney’s Office works with the courts to submit appropriate cases for Drug Court.

For more information about Drug Court and other diversion programs for adults, visit https://www.sao4th.com/resources/for-the-public/alternatives-to-court/diversion-programs-for-adults/.