Home » A Portrait of Harry Shorstein

A Portrait of Harry Shorstein 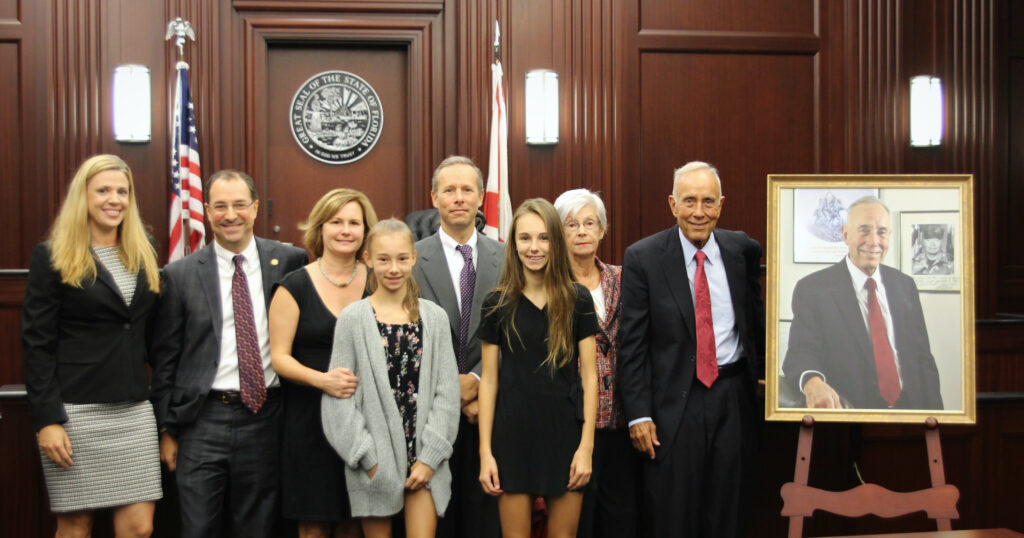 Former State Attorney Harry Shorstein and his family during a portrait unveiling ceremony at the Duval County Courthouse.

It would be easy to break down Harry Shorstein’s tremendous legal career in numbers.

A crucial three-year span as the city’s general counsel.

His true impact, however, can’t be measured in numbers.

The “family” Shorstein refers to are the attorneys and staff who made the office what it was during his years at the State Attorney’s Office, both in his first stint from 1970-74 and his time leading the office from 1991-2008.

Many of those family members were present Thursday in a place Shorstein has come to know well in his five-decade career: the courtroom. Instead of motions and arguments, there were stories of times and cases of yesterday as the State Attorney’s Office and legal community celebrated Shorstein’s legacy with a portrait unveiling.

“This is a great honor bestowed by great friends,” Shorstein told the crowd at the conclusion of the ceremony.

A different kind of legal start

As Shorstein tells it, his legal career did not start off exactly as he expected.

Shorstein grew up in the Riverside area with “the greatest mother in the world” and his brothers Jack and Bud, went to Lee High School, and earned his undergraduate and law degree from the University of Florida in 1965. He came home from UF and enlisted in the Marine Corps to serve his country during a time when all eyes were on the Vietnam War.

Before leaving, he went to see Public Defender Ed Austin to inquire about a job upon his return — Austin heard his story and said a job would be waiting for him.

Shorstein served as a captain in the U.S. Marine Corps and in the 3rd Marine Division, where he earned a Bronze Star with Combat “V,” a Vietnamese Cross of Gallantry, a Combat Action Ribbon, and a host of other accolades.

When he returned to Jacksonville, he went back to the Public Defender’s Office ready to work and asked the receptionist to see Mr. Austin.

Mr. Austin was not the Public Defender, she said.

Mr. Austin had actually been elected the State Attorney while he was overseas.

News did not travel quite as quickly in those days, especially for those who were not in the country.

It ended up OK — Austin had told his successor, Lou Frost, about Shorstein’s background and situation. Frost welcomed him as Austin had before.

In the early 1970s and after a couple of years at the Public Defender’s Office, Shorstein joined Austin at the State Attorney’s Office and served as a division head. In his first run in the office, he handled between 80-120 criminal jury prosecutions and 15-20 murder trials — including Ernest John Dobbert, who tortured and killed his young children in a notorious case that made headlines.

In 1974, Shorstein made history by being appointed the city’s youngest general counsel at age 33. It was not exactly a quiet time in the city. Westinghouse and Tenneco established a joint venture called Offshore Power Systems to bring offshore nuclear power plants to Jacksonville.

Supporters said it was a good that would have brought thousands of jobs to the area. Detractors said it was a bad deal that was fiscally unsound and potentially dangerous. Shorstein remembers a side-by-side spread in the local newspaper of two hands shaking over the deal with a line saying only Harry Shorstein could stop the deal.

Shorstein issued a lengthy report stating the deal could bankrupt the city and those involved could be personally liable if and when the deal turned south. The deal was never finalized.

Shortly after, he went into private practice for 15 years, where he stayed until an opportunity presented itself at his former office.

Return to the State Attorney’s Office

Shorstein’s former boss, Ed Austin, continued to lead the State Attorney’s Office during the mid-70s until 1991 when he resigned to successfully run for Jacksonville mayor.

His departure left a void that needed to be filled by then-Gov. Lawton Chiles.

Shorstein was on the short list. He said he did not know Chiles, but the two struck up a friendship after Shorstein went to Tallahassee as part of the interview process. They bonded over their military backgrounds — Chiles served in the U.S. Army and was an artillery officer in the Korean War.

“It was a great meeting,” Shorstein said with a smile.

Shorstein worked in the Blackstone Building on Bay Street in private practice when, about a month before Mayor Austin was sworn in, he was notified by a receptionist he had a phone call — it was Gov. Chiles. Shorstein said the governor would often call every candidate for a position to inform them of a decision, whether good or bad. This call, however, was good: Chiles said he was appointing Shorstein.

“What took you so long to call?” Shorstein recalled joking at the outset before the conversation turned to thanking him for the opportunity.

He then began the first of what would end up as five terms leading the office. He did not have to go far, either — the office was just across the street.

One of his hallmark ideas came in the area of juvenile justice. Shorstein said he thought it was part of the answer to stemming violent crime, which spiked in the 1990s and was particularly troublesome in the early part of the decade. Shorstein’s approach balanced prevention, intervention, and prosecution and tried to curb youthful offenders committing “gateway” crimes such as truancy and auto theft early to prevent recidivism.

“The level of seriousness increased as they got older,” said Shorstein.

The approach worked and made headlines, being profiled on programs like “60 Minutes” and publications like the New York Times. 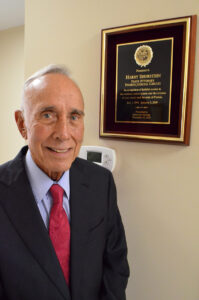 Many people who spoke of Shorstein during his ceremony praised his ethics. His professionalism. His advice to always “do the right thing.” One of Shorstein’s principles of leadership was to “set the example.”

He did just that in the courtroom, taking on several high-profile cases that resulted in justice for the people of the Fourth Circuit. George Loeb, a white supremacist who shot and killed a black sailor. Dr. William Sybers, the Panhandle Medical Examiner who killed his wife. Josh Phillips, the young killer of Maddie Clifton in a case that gripped the Jacksonville community. He was among just a handful of state or district attorneys to admitted to the American College of Trial Lawyers, an honor in which he is extremely proud.

There were also times when another of Shorstein’s principles, that “you can’t delegate responsibility” was tested. He immediately recalls the case of teenager Brenton Butler as one of his toughest times while in office.

Seventeen years of leading an office will result in the occasional negative outcome and not-so-friendly headline. But, there were far more good days than bad.

“I think we had a pretty successful run,” said Shorstein, again referring to the collective.

Quite a run, indeed.